Cheers to the Future-Forward Female || DDK

In the course of the next three to five years, we will witness a rapid, rampant and radical rise of women who will create value, multiply impact, elevate prosperity and heal crises in their communities, countries and continents!

These leading women would combine strength of character, competence and compassion to shift the frontiers of human progress into unprecedented heights – both in the acceleration of what is and the activation of what is to come!

What would release this unusual generation of leading women?

Vision – They will be impregnated with a compelling image of future possibilities and they will refuse to unsee what they have seen!

Prototypes – They will come into revelatory recognition of their unique matrix, and leverage their highest potentialities without fixating on existing templates and molds. They will ditch stereotypes in the pursuit of their own prototypes.

Failure Affinity – They will have a new body language around failure. Missteps and mistakes will hold new meaning; as they see and steward their pain and past as navigational tools for future possibilities.

Mastery – They will not be average but will abhor mediocrity, knowing it is a disservice to God’s investment. They will commit diligent effort to grow expertise till they become forcefields of brilliance, thought-leadership and excellence in their spheres of influence and practice.

Legacy – They will reorder their lives and leadership around a long-term devotion to legacy, beyond the craze for popularity and promotion. They will build the next generation and raise multiples of “twelves” in quick succession. Selah.

The Underground – They will be content with being faceless, nameless and title-less in seasons of quiet obscurity, while they continue to reinforce infrastructures that will become monuments of future reference.

Alliances – They will construct and constitute power circles, partnerships of purpose and the critical mass around strong interests, understanding that it takes an army, more than a soldier, to conquer a foremost fight!

I am a Future-Forward Female! Say it with confidence!!❤️

PS: If you want to learn more about how to position yourself for relevance as a future-forward female, if you want to learn how to ride on the waves of this dangerous opportunity, sit into your deepest identity, and crack open a Roadmap that is divinely and authentically yours, you need to check out the Visioning Your Year Retreat Course. 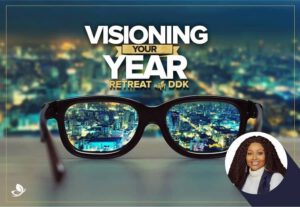 This FIVE-Part Coaching series will set you up for success in this decade!